human is eliminated from heritage

Map Series - Preservation Uniformitarianism Preservation Uniformitarianism, along with the film “Winfield House Diplomatic Mission“, is a multimedia mapping research that questioning and criticizing existing historic sites condition in London. The map discussed multiple interdisciplinary methodologies to achieved that goal. These methodologies were used to study and document the Winfield House, which is a sample private properties that people has limited knowledge about its history.
‍
* Final Videography, Websites, Historic Preservation Reports, VR Interface Models, produced by the research group ,are delivered to the state department for restricted usage. Here presents some of the released portion, all rights reserved to Yiqi Zhao.
Award
ArchDaily: The 80 Best Architecture Drawings of 2017
Symposium on Undergraduate Research & Creative Expression, Iowa 2018

Preservation Uniformitarianism, along with the film “Winfield House Diplomatic Mission“, is a multimedia mapping research that questioning and criticizing existing historic sites condition in London. In London, one of the most famous historical city, one have access to one or more historic sites no matter where he is located. There are also continuous tourist flow from morning to evening. However, 90% of the historic sites are behind stage, most of them are private properties. The public awareness of historic sites remains at famous churches, museums, and monuments. Even so, these famous property still blocked a large portion of human activities for the sake of preservation. Some behind-stage properties have limit access to preservation budget while also do not have chance to educate the public of related history.

The map series analyzed and illustrated the issue and advocated a new way of preservation: preserving while still maintain human engagement to the historic properties. The map discussed multiple interdisciplinary methodologies to achieved that goal. These methodologies were used to study and document the Winfield House, which is a sample private properties that people has limited knowledge about its history. 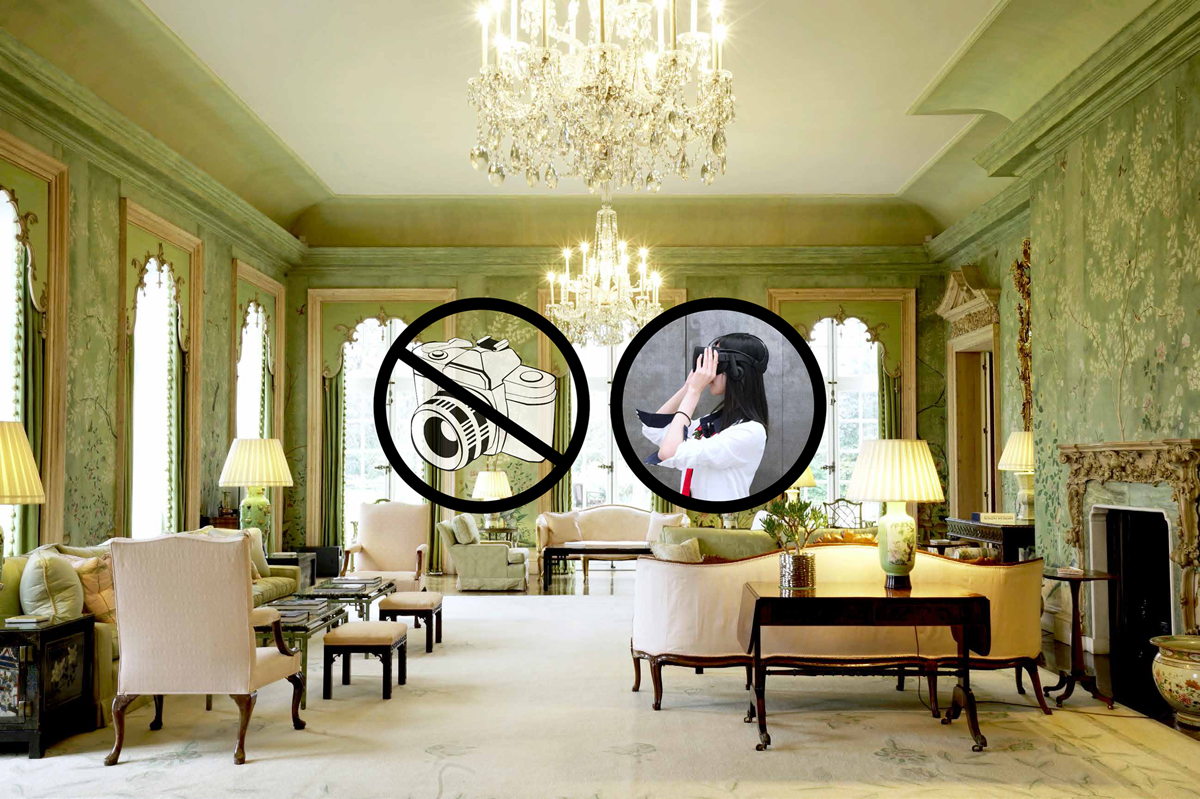 London, serving as UK’s political, economic and cultural center, is a polycentric metropolis that never sleeps. There are mixed type cultural districts that comprise historic gardens and buildings, museums, churches, cinemas, concerts, and universities. The city of London dates back to Rome time. 99.3% of residents live less than a mile from a listed heritage asset now. 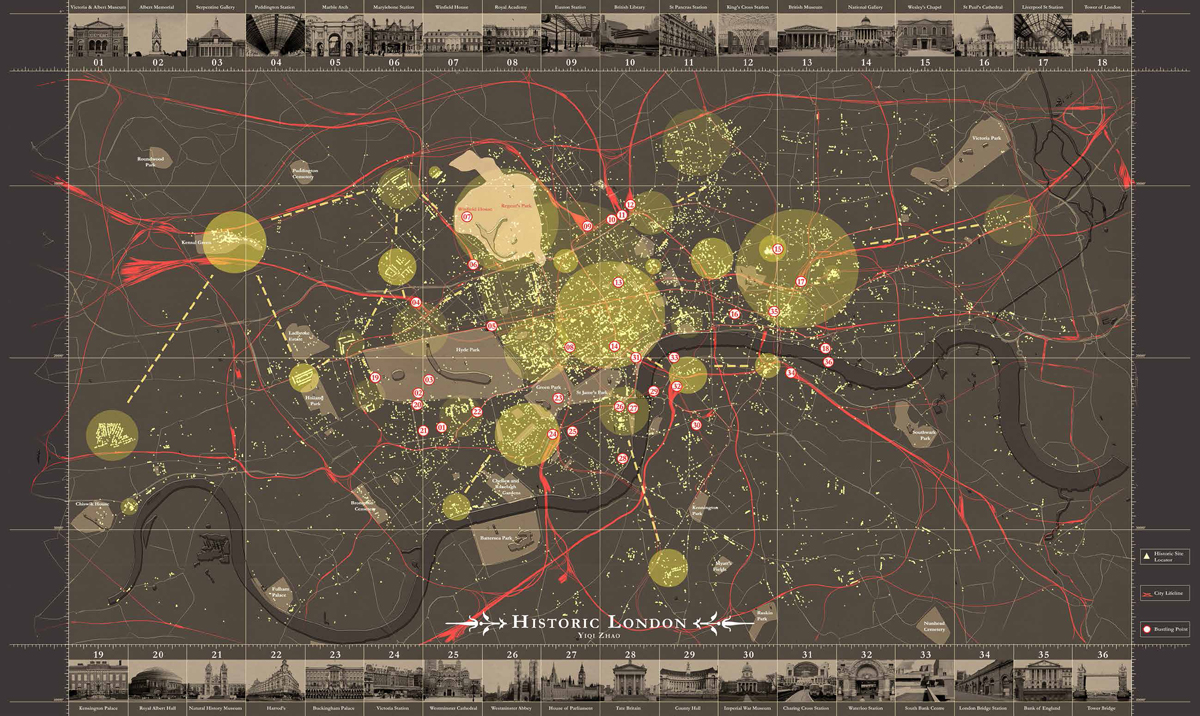 Throughout decades, human dispersing and over controlling at cultural heritage sites reaches to a very normalized point, major popularity has nearly no chance to truly touch the history and understanding historical significance. Public knowledge about historic properties commonly stops at touring and sightseeing level. There are also countless properties people have no access. From the belief of human activities through time evolving present to history, we are questioning if blocking human activities away from culturally significant properties is our only choice. 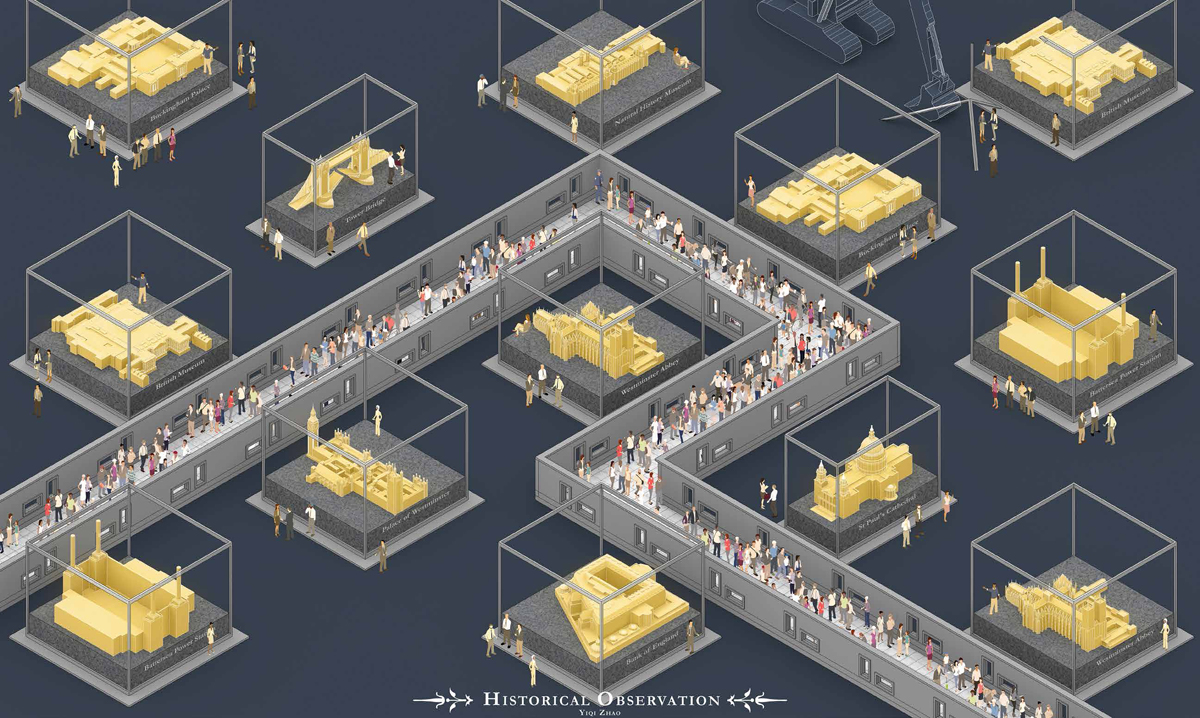 From the national and international view of preservation, it is meaningful to put segments of preservation attempts and documents to front stage and educate people as well as celebrate heritage properties; it is also a momentous development to manage human activities within preservation goals in a comprehensive way. Methodology Narrative visualizes our belief of new preservation procedure incorporating contemporary technology such as digital illustration and virtual reality with traditional research methods. We expect neo-methodology of preservation to be the key to social, economic and cultural future for a global perspective. 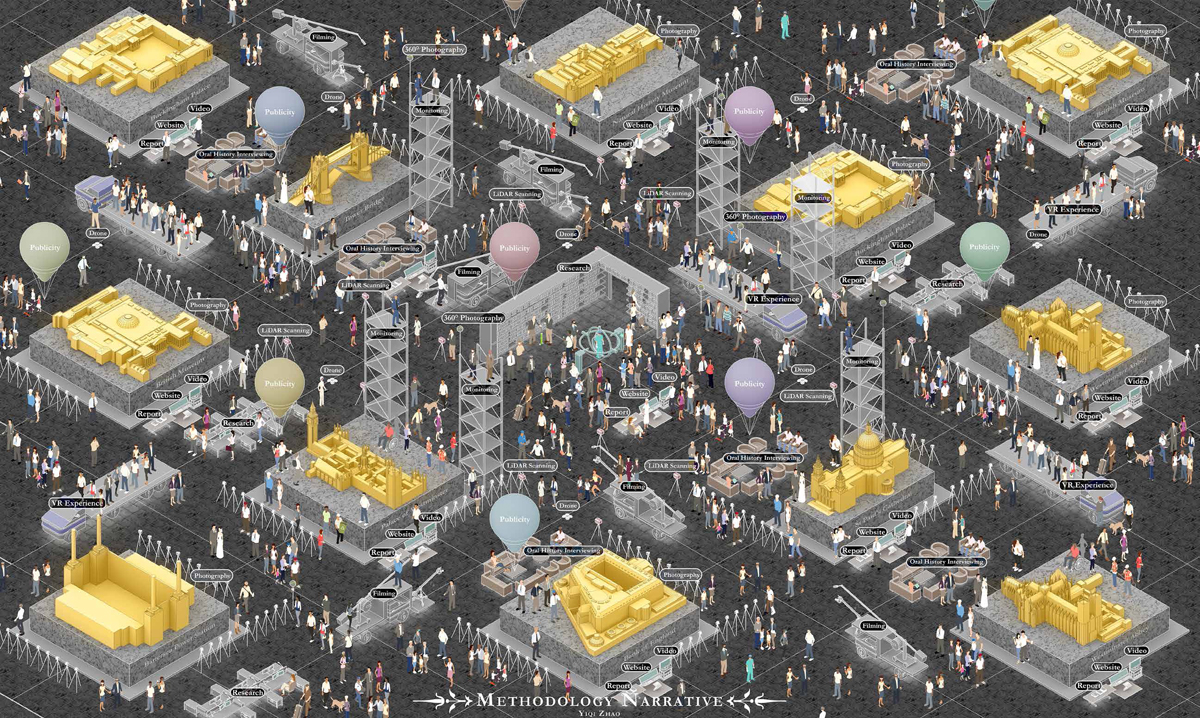