The SoundSculpt is a generative MIDI tool for enhanced perception performance transforming the practice of sculpting into Audio AR technology.

The tradition and practice of sculpting days back to ancient Greece and ancient China time, within the long evolution of sculpting, various tools and methodologies are developed. From hand shaping to digital sculpting with 3d software, sculpting gets easier and more convenient, but the sensory of volume, movement and massing tend to get eliminated. To regain the rich and pleasant experience, the AR MIDI tool SoundSculpt provides the user a chance to do sculpting in a novel medium: sculpting a virtual bubble with multi-sensory from inside out while doing MIDI performance. In this experience, the user can perform sculpting movement spatially with hearing and touch at the same time of generating life music and visual art. The SoundSculpt, which can be deployed to an AR app for individual use or web-based software for larger visual projection, is developed using BOSE AR Frame.
‍KEYWORDS
Audio AR; Cognitive Enhancement; User Interface; Interaction; MIDI; Experience Design; H; Digital Media; Responsive Environment; Game; Product Design; Visual art; Performing Art; MIDI; Responsive Environment; User Experience; Sculpt; Sound Research; Game Design
‍
Yiqi Zhao
Mentor: Philip Tan, Mikael Jackobsson
Note: this research is supported by BOSE and MIT Game Lab

The dialogue of this research is between humans, design, and tools. The product focuses on digital times audience who are designers, music and art lovers under high pressure, or daily anxiety, and would appreciate a light generative interface for resting time. This research proposes an XR MIDI tool that can not only be used in large stage life music performance but also for individuals’ daily use. The broader goal to start this research falls into the vision of providing convenient, playful digital products for emotion regulation and anxiety relief. The theoretical approach falls on two parts, the synesthesia simulation, and emotion regulation strategy.

Synesthesia refers to the production of a sense impression relating to one sense or part of the body by stimulation of another sense or part of the body. According to multiple pieces of research, the existence of a lower, unconscious degree of synesthesia in non-synesthetes is found widely for music perception. [1] Vision, hearing and other senses are strongly connected. There are also many musicians claims that they can hear the color of one piece of melody and can describe details as thick, dark, sweet, white...Based on the theory of synesthesia, sound cues could be intimately effective to enhance the act of touching and perception for motion, volume, acceleration.

Games with identical outputs and visual rewards are considered to have significant psychological impacts on the user. During the game experience, the user often enables the various type of cognitive emotion regulation like reappraisal, acceptance. The experience also reveals self-control and self-confidence building and fulfilling. Thus, the highly multi-sense game can be effective for emotion regulation towards specific mental health and well-being seeks. The main purpose of this research is to examine new possibilities for perception enhancement within the design in digital platforms, specifically how can we enhance the experience of performing by transforming tangible notions into the intangible medium. [2]

The initial concept of digitizing sculpting into an audio interface comes from the breakdown of four aspects: cross-culture appreciation, the creation of individual imagination, materiality as medium and methodology, and focus as a mental aspect. The concept engages multi-perception into a closed-loop interface by preserving the user attachment of art practice and transforming the materiality and medium of the creation process. The loop is constantly happening during playing among “listen”, “sculpt”, and “art generation feedback”.

The surface manipulation modeling, Table3, was studied in rhino with grasshopper and c#. Several forms of visual output were generated using mesh, vertices and move commands. These studies are deployed as simple mouse click interactions. In table 3, each interaction visuals is captured at 20ms/frame.

B. Push slowly
A. Slide over

‍User Scenarios for app daily use:

• daily lightweight play on a smartphone, between working sessions, during the coffee break

• effective for a positive reappraisal for emotion regulation, reduce anxiety and back to work

• refresh body and brain with multi-sensory activities in the space, also a body stretching time

User Scenarios for performance use:

In layer A, there presents a constantly playing soundtrack. Figure 1. The BOSE Frame is used to orientating the performer with head rotation data. The data comes from gyro sensors. The coordinates of the performer’s head rotation are mapped to sound pitch and volume with c# scripts in unity. [Head Up & Down] is mapped to [Pitch Up & Down], [Head Left & Right] is mapped to [Volume/Stereo Up & Down]. At the horizontal rotation plane, the true north is at the fastest and loudest sound cue.

•Head Left & Right: Volume/Stereo Up & Down

Play testing prototype is generated using BOSE Frame and mouse right or left click on web display using unity with c#. There are three scripts to control the sculpting manipulation on a virtual bubble: mousebeat(c#)[A], mouseinput(c#)[B], and sculpt(c#)[C]. Table 5.

Play testing interface based on Web/VR:

•On Mouse Left Down - /bubble inflation/

•On Mouse Right Down - /rocket beats/ 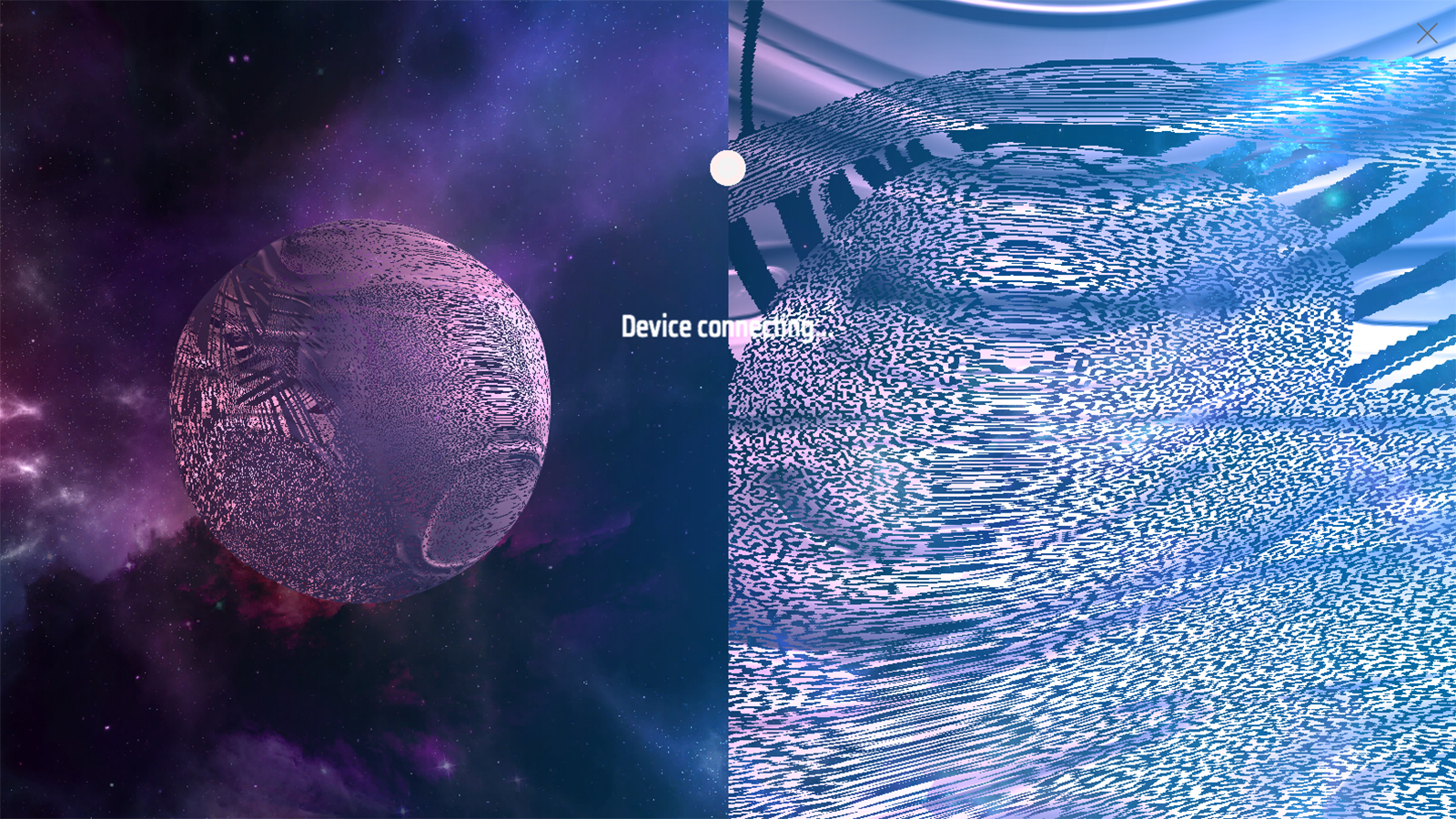 Camera 1: rotating around outside the bubble

Camera 2: tracking the center of manipulation, displaying from inside, Figure 5

Virtual bubble display can be viewed in VR or recorded together with the soundtrack generated from users, which combines visual sharing, performing, and performer-viewer interaction. Figure 6.

In summary, the engagement of multi-sense performance in close-loop interface with audio augmented reality can successfully enhance people’s perception of spatial volume, sound, motion, and orientation. The experiment also indicates that users are easier to orient themselves on the horizontal plane rather than vertical plane, and easier to associate material deformation with sound pitches. Future play testing may be done for measuring the playful quality and sound-form association with data monitoring. The testing methodology to determine emotion activities might include a before-after bio-metric data measuring using pulse sensors, GSR sensors, or EEG headband.