Dance as a choreographic practice has evolved over the centuries from a pure personal expression and communal celebration to an embraced performance art form. Such adaptation advocates for the art, allowing opportunity for diverse development of the art form in a professional setting. Yet, this also begin to create limitation to people’s experience of dance through the established performer-audience relationship. Contemporary, technological innovations in the field often emphasizes on the amplification of artistic expression, further neglecting and eliding its originally empathetic, interactive nature.

‍How can we augment intangible forms of artistic expression, like dance, to become more interactive?

Dance, the combination of creative utterance and professional choreographic practice, is powerful medium of artistic expression. This paradoxical form of art not only requires requires precise display of body language and technical articulation, but also embraces the subjective voicing of emotion, beauty, and figuration [1]. Early invention of dance focuses on transforming celebration to expressive movements, primarily focusing on the invention of religion, community and empathy, which led to the accumulation, condensation and reinvention of movements into the mass collection of choreographic practices, allowing varied styles and expressions to co-exist as means to different content and settings [2]. It helps audiences to understand the performative art better, yet it slowly devours the innate nature of dance as a free form of expression. The majority of dance forms are limited to shows,were the the performer and audience is divided by the concept of a stage,limiting the audience’s appreciation of the art to only based on visual perception.Modern technological contribution to dance focuses on amplifying the dancer’s expression on stage, aiming to create extravagant responsive staging that makes the entire show as a complete unit, while the opportunity to create tangible,the interactive projection for the audience of this performance is commonly under emphasized.

KhoRE:ios (coming from the Greek root of choreography,“χορεία” or khoreios [3] ) is a proposed responsive, integrated orthogonal system that allows translation of choreographic expression to quantifiable data powering a series of tangible user interfaces (TUI) [4],allowing audiences of this performance to interact with the dancers without interrupting the dancer’s personal expression.

Rather than focusing on projecting and mimicking the movement and choreography, we should emphasize on inspiring new forms of INTERPERSONAL COMMUNICATION through an ambient, interactive setting that engages both the choreographer and the audience in ways current medias cannot. 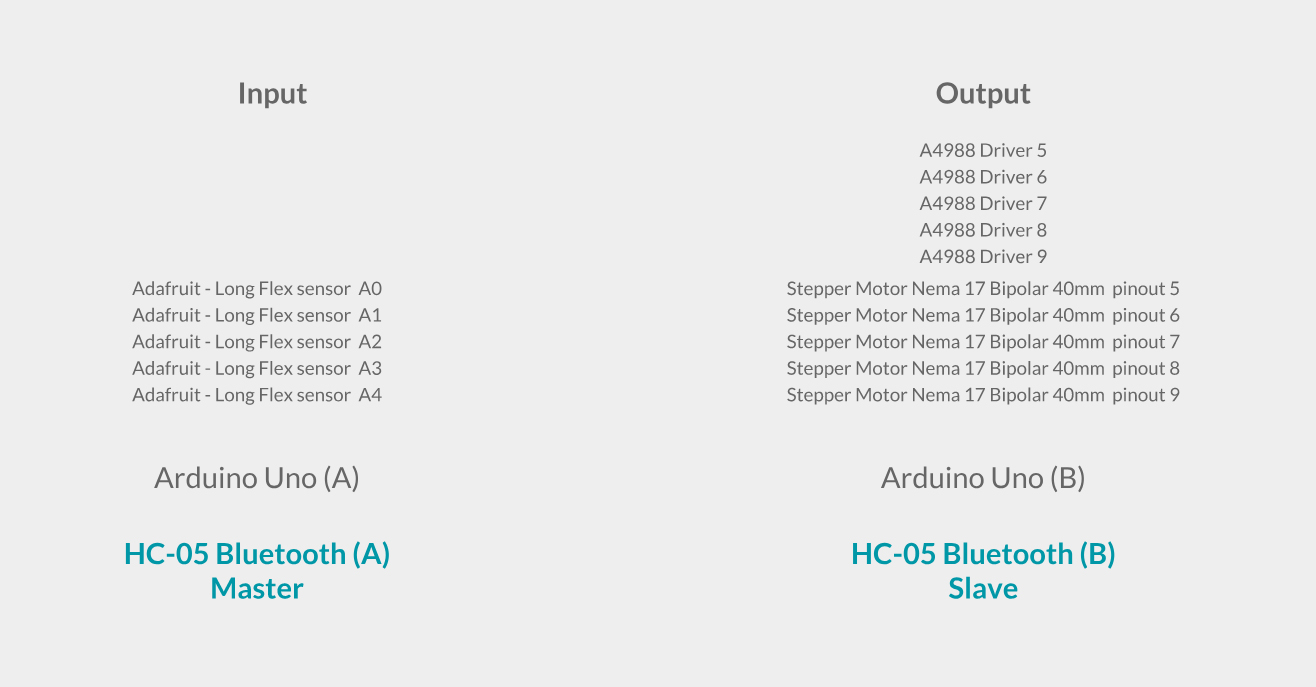 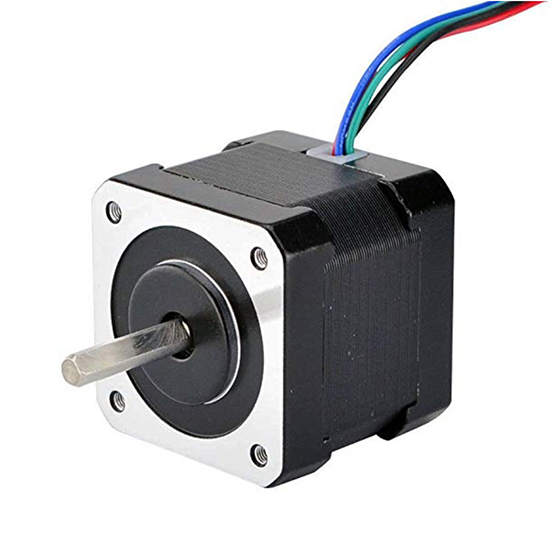 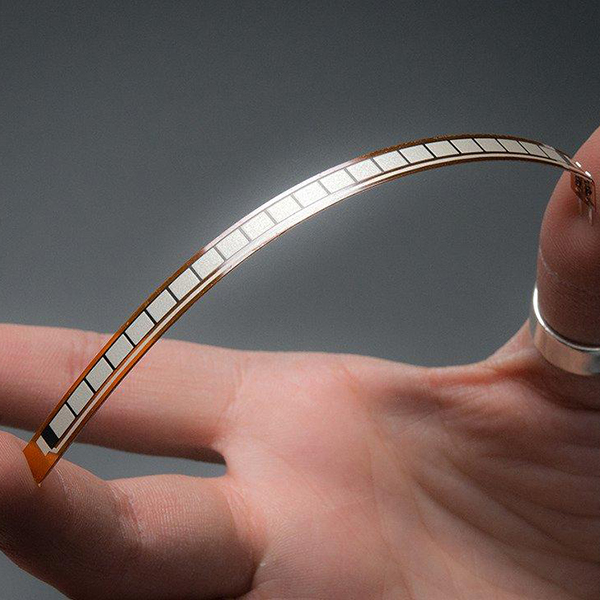 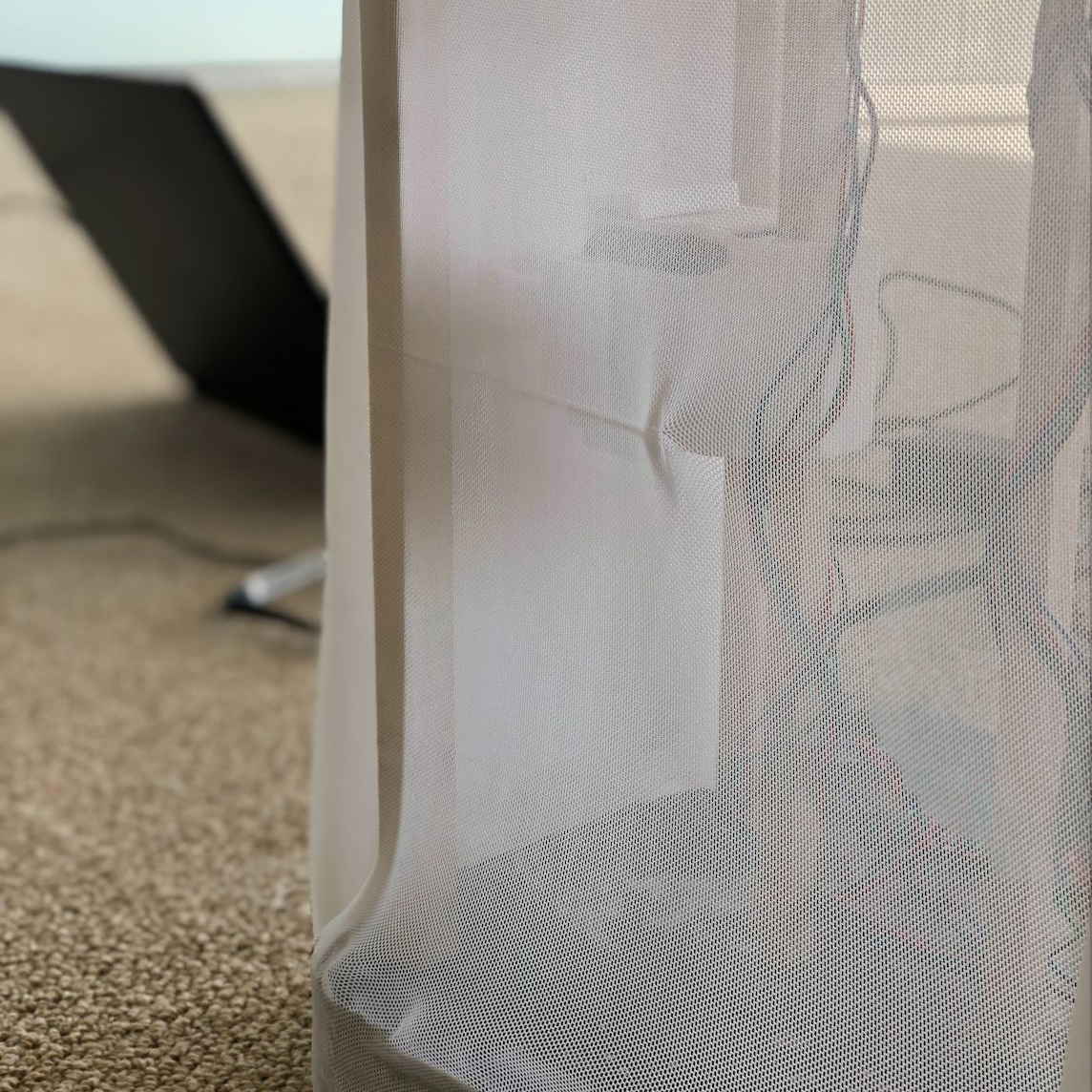 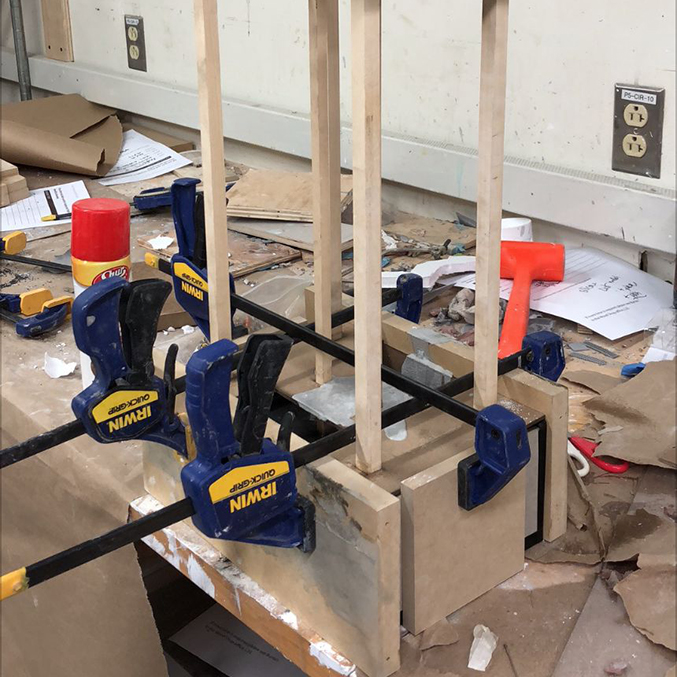 KhoRE:ios begins with the attempt to reconstruct a direct interface of the dancer’s performance based on the existing relationship between choreography and audience perception. Through prototyping a set of devices that can translate movement, we are interested in the way technology may open possibilities for interaction and inspiration.

Our designed input device is an electronic-embedded wearable with five resistive flex sensors located at specific points on the dancer’s body,all connected via a Bluetooth-enabled micro-processing component place at the center of the spine between the scapula. Flex sensors were specific used for the prototype with the intention to allow direct, localized translation of choreographed body movements, rather than a spatial output due to our intent to focus on the bodily expression of the dancer, rather than the calculated angle and location the dancer’s position. Through continuous electrical testing, five points with optimized differential data output was decided: two along the deltoid muscle, one fitted over the lower spine and two over the side lumbar region as shown in fig. 1. The precise movement of these parts of the dancer’s body was sent directly to the microprocessor located between the scapula of the dancer, an area we determined, through various movement testing, that is least likely to affect the movement of the dancer. Fig. 2 and Fig. 3 shows that all electronic components were encased in a designed shell that fits over the natural curve of the dancer’s back, as well as visually communicative as a foreign object on the body of which assists in movement translation. 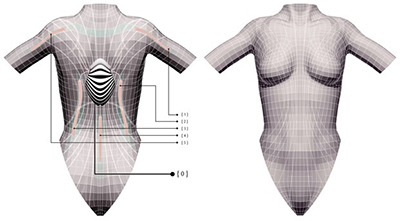 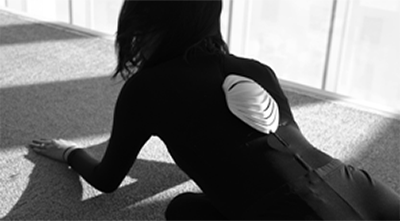 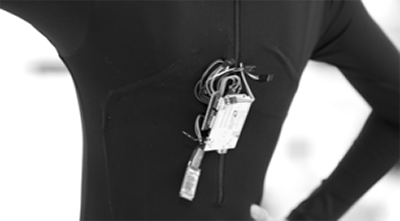 The series of gathered resistance change was reviewed and calibrated prior to finalizing the interface design. Fig. 4 is a graph of obtained resistance data from the five flex sensors plotted during a 15 second increment. The result showed no correlation between movement and presented data due to the issue with direct correlating degree of flexing with the idea of movement speed. Hence, the second graph Fig. 5 displays the relationship between differential resistance per 0.1 second over 15 seconds, mapping the exact degree of change of the dancer. From the series of controlled plotting we determined that the region of error is approximately ±4000 ohm, hence we have created a baseline of 8000 ohm, that only recorded change above this value will be recognized by the microprocessor as real detected movement. 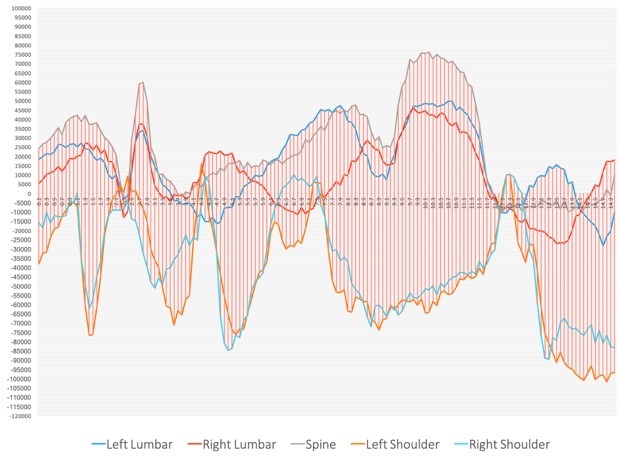 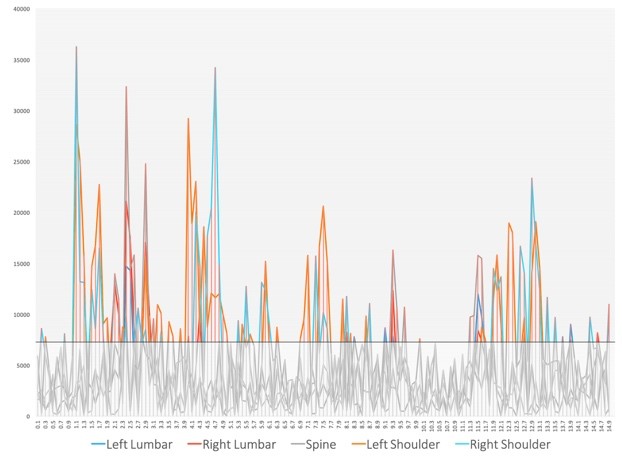 The output design is a mechanical sculpture operated by a series of geared stepper motors connected to a Bluetooth-enabled micro-controller as shown in Fig. 6. The motors are connected via a series of dowels, allowing a morphing structure to be created as the motors turn based on the input. The resistance reading from the integrated system on the dancer’s body is transferred via the Bluetooth to the micro controller. The numbers are converted to direction and velocity, allowing the interface to shift from precisely based on the input of the dancer. The stepper motors are joined by dowels of different lengths at different angles, creating the possibility for form organic shapes, reflecting the performer’s movement in an abstract yet responsive way. Covered by a translucent surface, the structure should be able to morph and move in an organic manner, inviting its audience to interact and engage with it.

Prototyping.         In order to test and calibrate the motor reaction, we built a simplified prototype with a few yards of white power mesh over a constructed wooden over the motors, and attached the spindles to the motors to surfaces on the mesh through strings. Through calibrating the speed of string-pulling and distortion of fabric, we aimed to optimize the physical and effect with a setting that is most natural to translating the beauty of the choreographed movements. 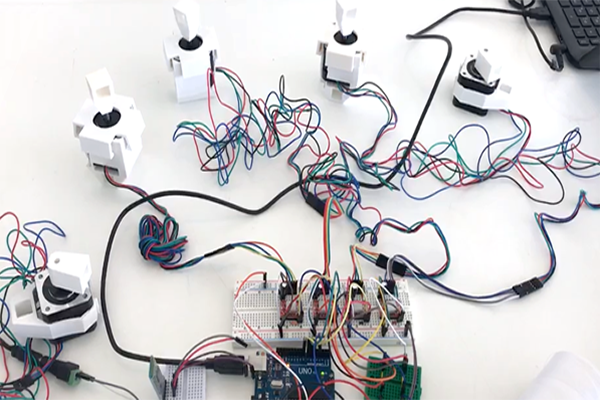 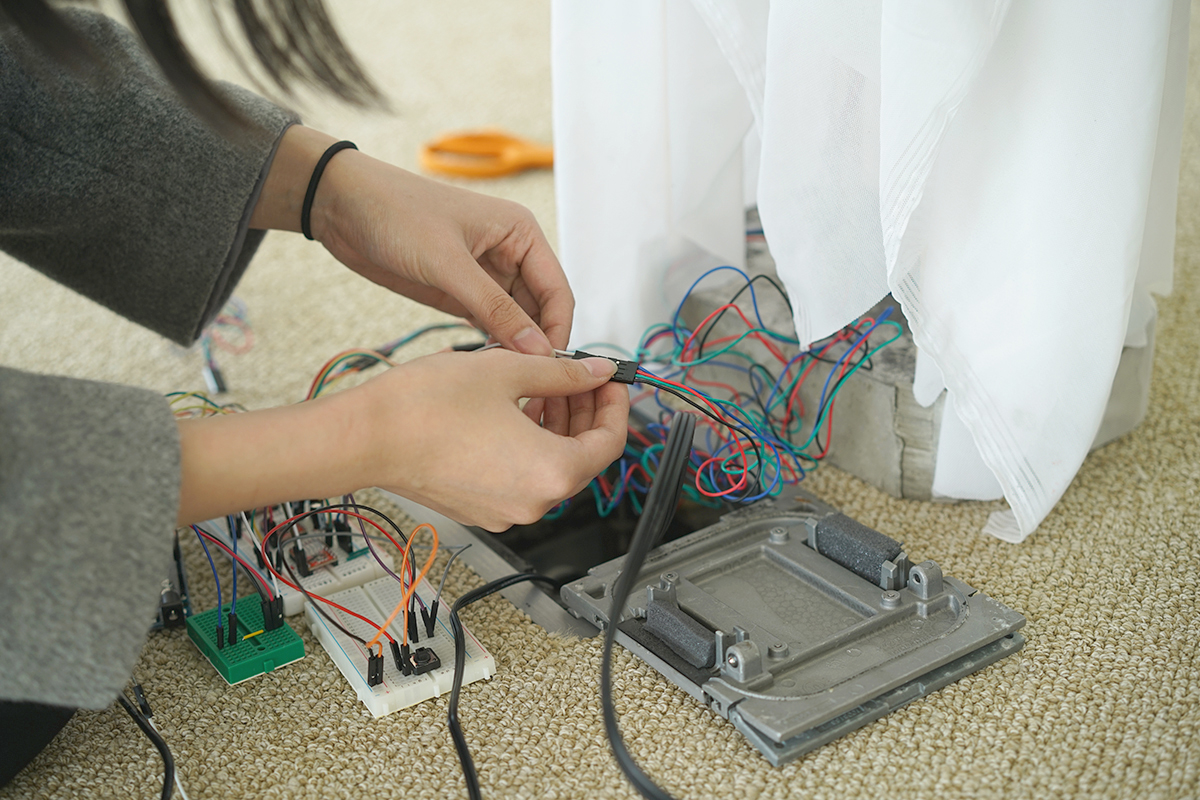 The affordance of KhoRE:ios’ interaction setting is mainly categorized in the I/O design, the cross-senses quality, and the cross-time-space nature. For the I/O, based on the traditional topic of capturing and enlarging performing artists’ movement, KhoRE:ios takes a step further. In this stage, dancer’s motion is not treated as a skeleton that connected by knots but documented in circular velocity and accelerometers. Dancer’s intentions such as hitting, bending, pitching, rowing, and turning are documented based on progressive data streams. Secondly, the mechanical sculpture engages five senses during the performance, as well as also realize possibilities for people with a vision disability to appreciate performing arts. The setting of mobile mechanical sculpture also provides opportunities like public installation outside stage,performance ambient documentation, and recreation.

The mechanical sculpture in this certain scenario serves as not only a co-performer but also a tangible medium that links dancer’s moving intention downstage. The audience can now touch, feel, and observe in a micro and detailed way. 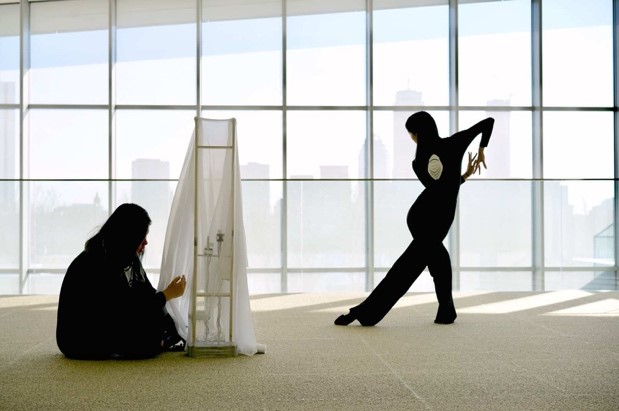 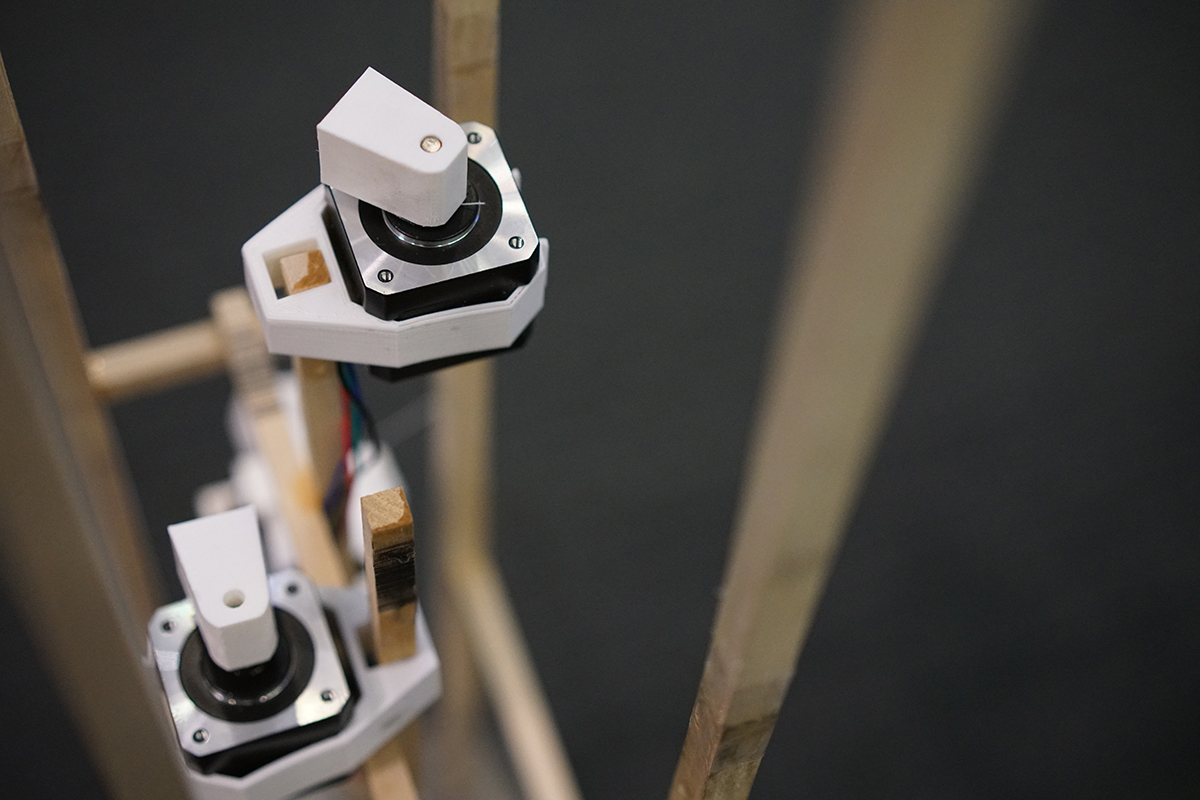 The physical prototype gave insights to the way mechanical translation of emotional expressions. The speed and rhythm of the machine doesn't necessarily directly translate, nor amplify the original dancer’s movements, yet it creates an alternative way of interaction and feedback. The simulated design gave possibility to a more mobile, organic representation based on the prototype.

The simulation, fig. 10, shows the change of translated form based on dancer’s movement. The result interface not only changes form, but also creates a trail of movement caused by the change, which would invite the audience to engage with the interface. However, based on the result, there is a very subtle connection between the dancer’s original expression to the designed outcome,which could potentially cause issues of understanding among the audience. We believe that through further calibration and design, we will be able to create a more precisely integrated interface that is able to better communicate the dancer’s expressions. 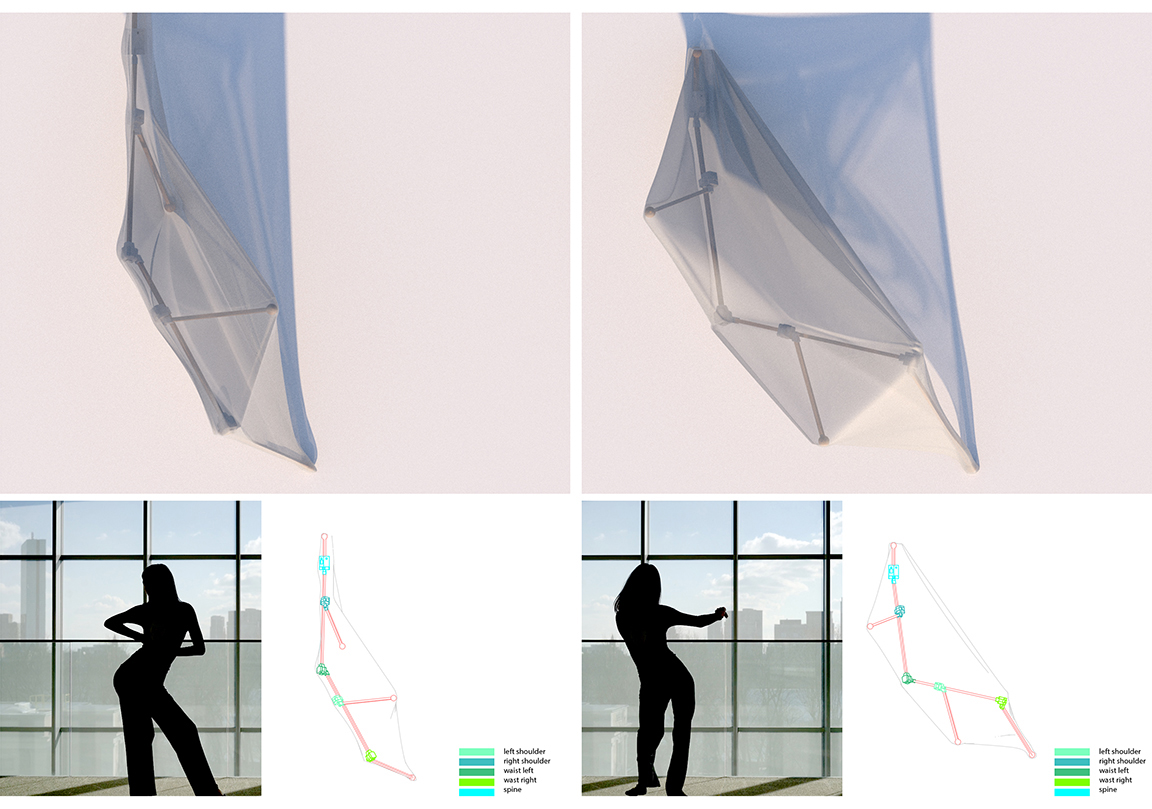 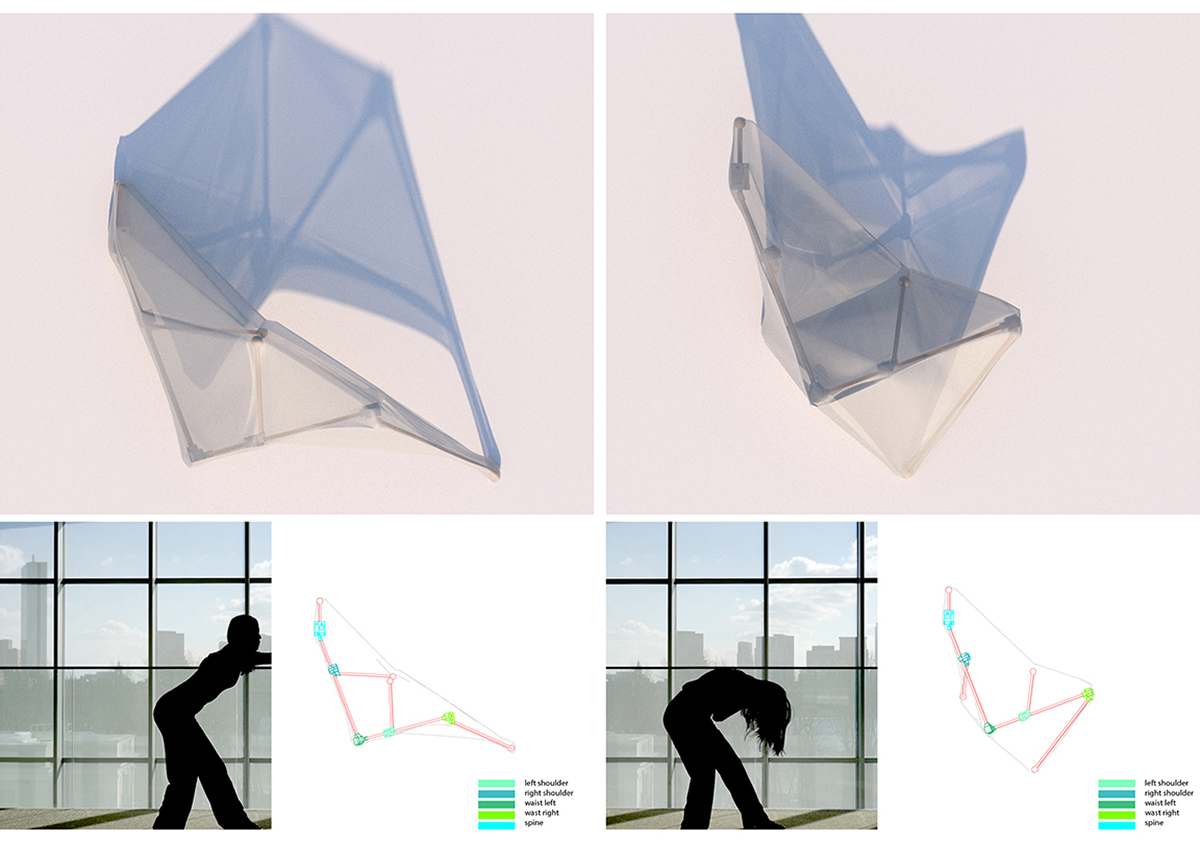 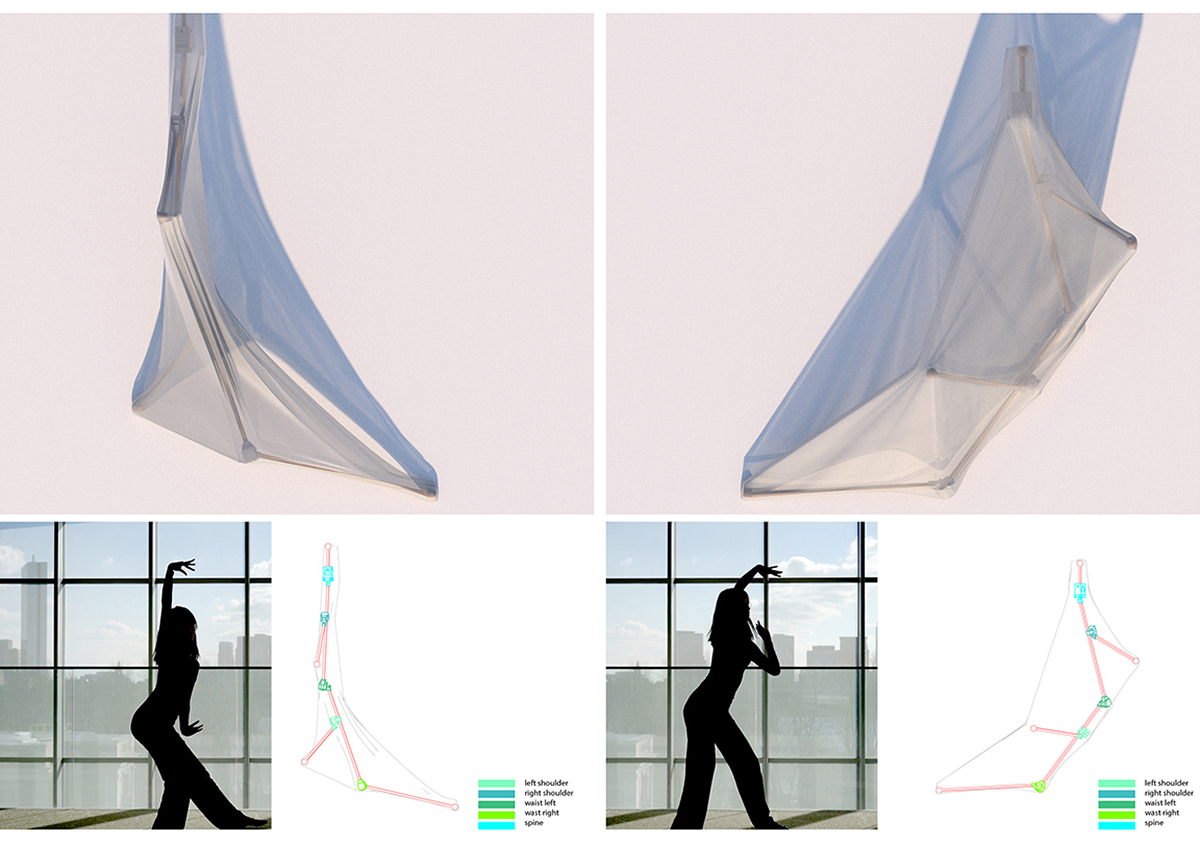 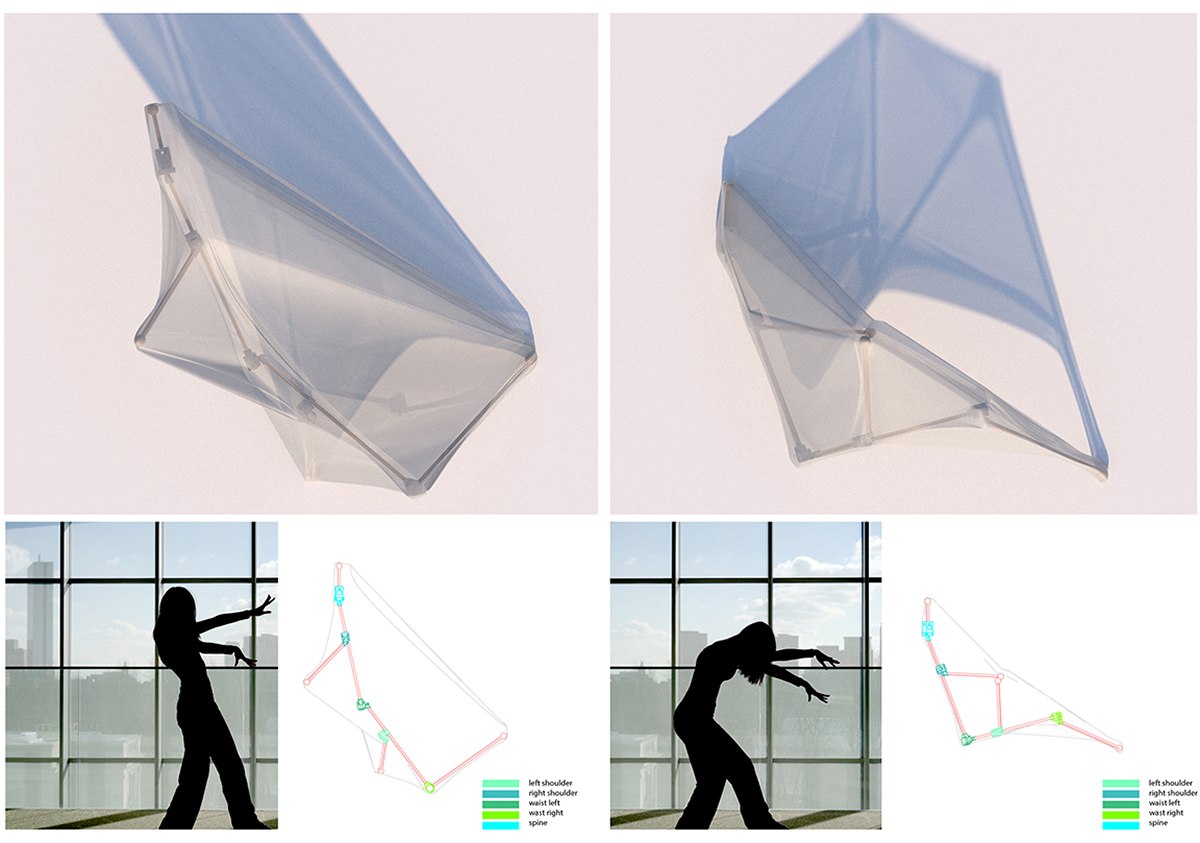 Accessibility.       The paired device proposes a new possibility for the audience with accessibility needs. Without the limitation of purely visual outcome, the audience will be able to feel the performance through other means, that may be more informative than the original direct output.

Extensions.          The presentation of this project proposes the possibility of using technology to translate the dancer’s physical and emotional presentation from any input to any output. The current experimentation is done on translating the dancer’s physical movements to visual, tactile, or audio output. Further exploration could translate the dancer’s electrocardiography pulse, biological state and location into a more diverse range of output, allowing the dancer to not only express dancing through an array of choreographed movements, but also control the way audience perceive the dance all the way from precise physical movement to an empathetic projection of experience.

We believe that interactivity and immersive experience is the future of performative artistic expression. Audience can often only perceive very little of how much the artist or dancer choreographed, as the experience is heavily limited by the physical constraints of these performances. The great variety of details the performer often hope to express, from subtle expressions of emotion to exaggerated spatial movement across the stage, can rarely be communicated to the full extent as the audience cannot fluidly control the perspective of which they perceive the performance. Dance, as one the most beautiful, humanly, expressive form of art, has yet to be translated into a form where the dancer and audience could easily feel the presence and interaction with each other without causing disruptions and limiting the movements and choreography. KhoRE:ios proposes an alternative performative interface where this kind of connection between the dancer and audience can be established, improved and re purposed to inspire newer forms of artistic expression and interaction.

This work was partially supported by the Hiroshi Ishii and the Tangible Media Group at the Massachusetts Institute of Technology Media Laboratory, under its Fall 2018 Course MAS.864 Tangible Interfaces course.